Puntan Dos Amantes and the Tale of the Two Lovers Statue 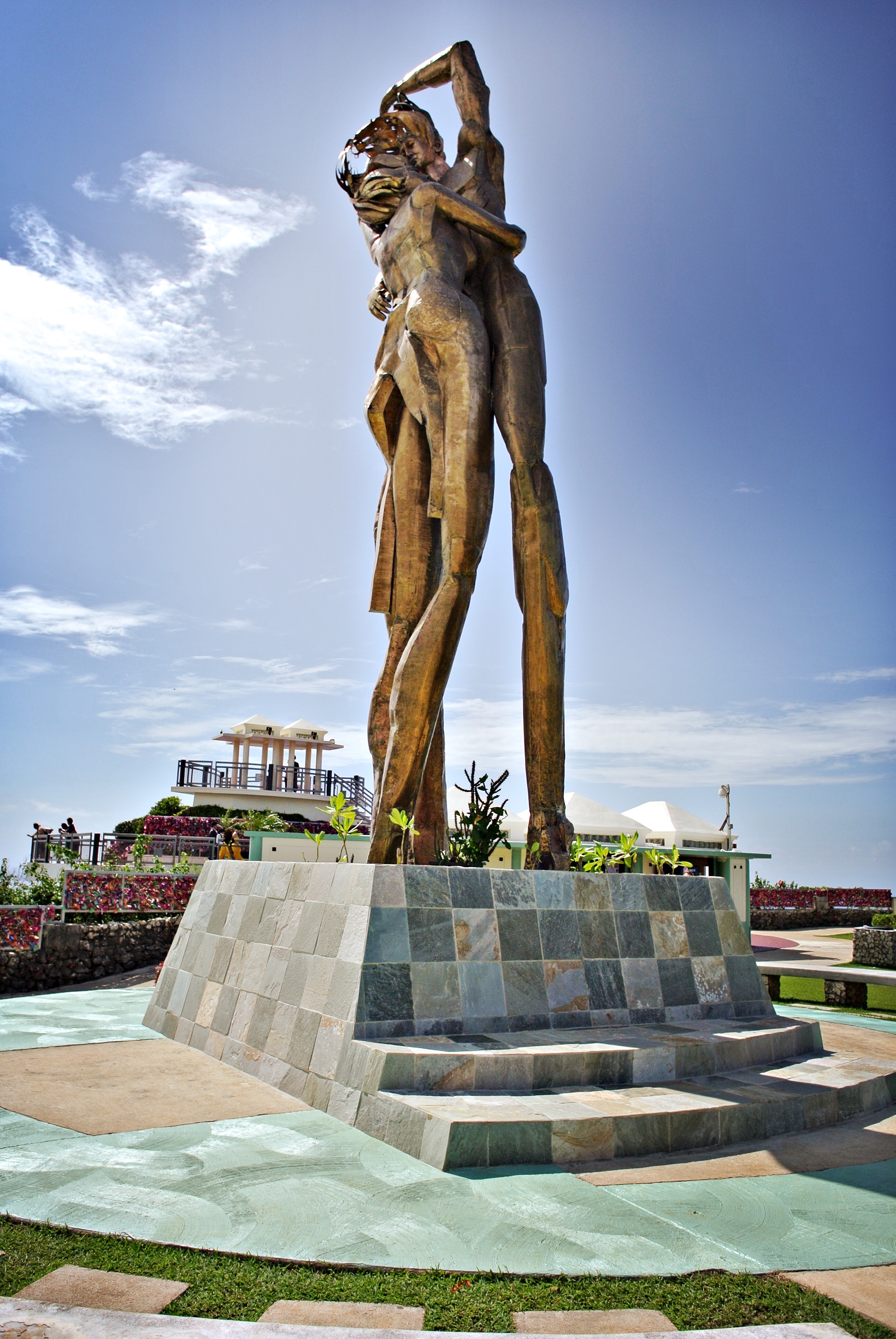 Puntan Dos Amantes, or Two Lovers Point, is without a doubt one of Guam’s most iconic attractions. Every year, hundreds of thousands of visitors are drawn to the towering cliff that is the site of one of Guam’s most well known and romantic legends.

The legend of Two Lovers Point is a timeless, bittersweet tale of eternal love. Long ago, during the Spanish colonial era, there lived a family who owned a great deal of land and were highly respected in the community. The father was a wealthy Spanish businessman and the mother was the daughter of a great maga’låhi (Chamorro chief).

Their oldest daughter was a beautiful young woman, admired by all for her natural charm. One day, the girl discovered that her father had arranged for her to wed to a powerful Spanish captain. She was so distraught that she ran away and kept running until she found herself on a secluded and peaceful shore.

There on the shore she met a young man from a modest Chamorro family. He was a gentle man with a strong build and she fell in love with him under the moonlight. She returned home with a promise to see him again.

When the girl’s father learned of the two lovers, he became angry and ordered her to marry the Spanish captain at once. However, that day at sundown, she slipped away and once again met her Chamorro lover.

The girl’s father, the Spanish captain, and a group of Spanish soldiers pursued the lovers up to the high cliff above Tumon Bay. The couple found themselves trapped between the edge of the cliff and the approaching soldiers. All the young man could do was warn them to stay back. The father ordered the soldiers to halt. 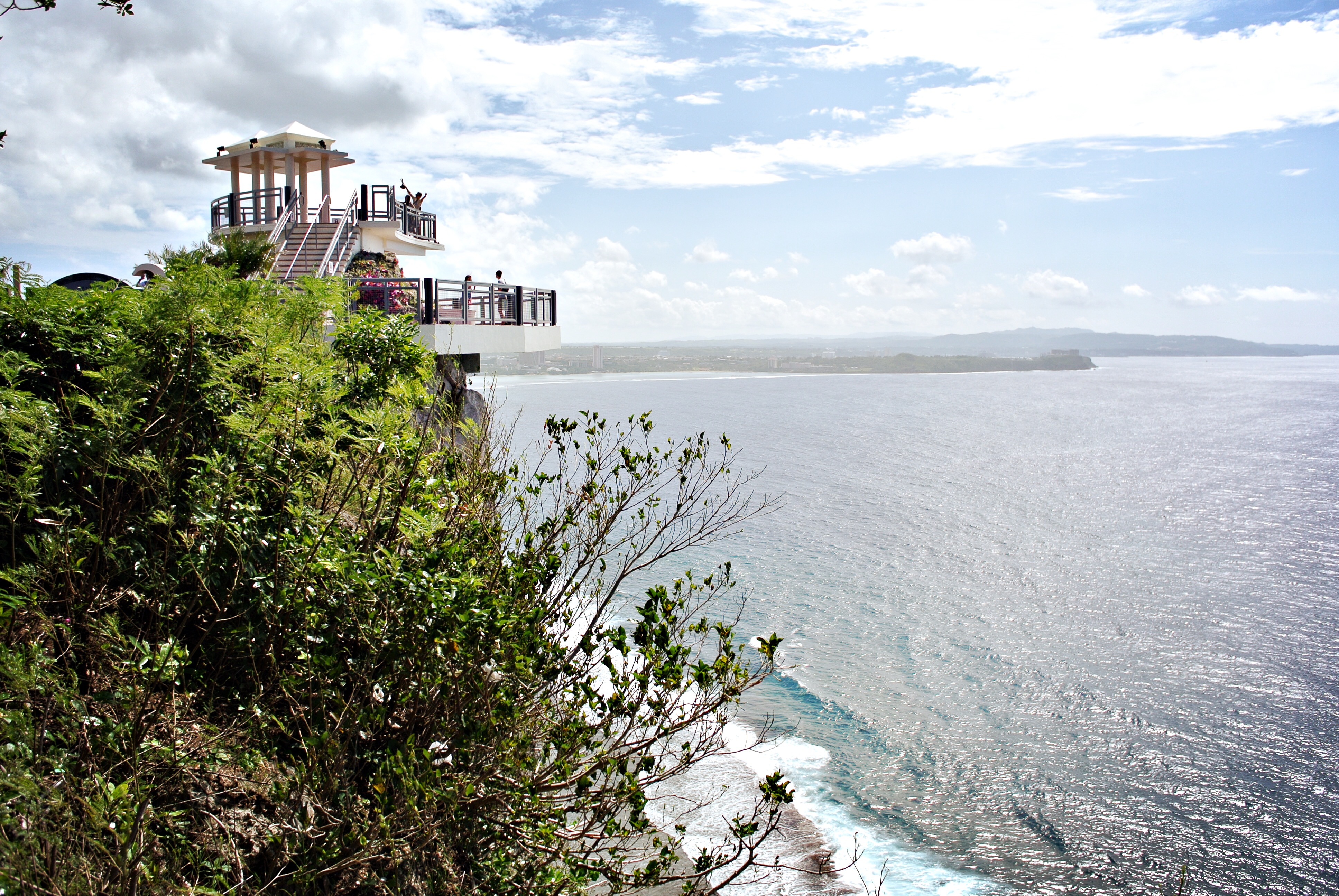 The lovers tied their long black hair together into a single knot. They looked deeply into each other’s eyes and kissed for the final time. Then they leapt over the long, steep cliff into the roaring waters below. Her father and all who remained rushed to the edge and stared in great anguish at the ocean below.

The lovers were never seen again. From that day on, the towering cliff became forever known as Two Lovers Point (Puntan Dos Amantes).

Today, the Two Lovers Point site features two tiered lookout points that offer a sweeping view of breathtaking Tumon Bay, high above crashing ocean waves 400 feet below. In the middle of the park, a magnificent brass statue of two lovers locked in an embrace gleams in the sun and extends to the sky.

In a story that begins as tragically as the original legend, in December 2002, the raging winds of Super Typhoon Pongsona toppled the beloved statue of the two lovers to the ground, damaging it so extensively that it was believed to be beyond repair. Sadly, the statue wound up in a scrapyard, destined to be discarded and never seen again. 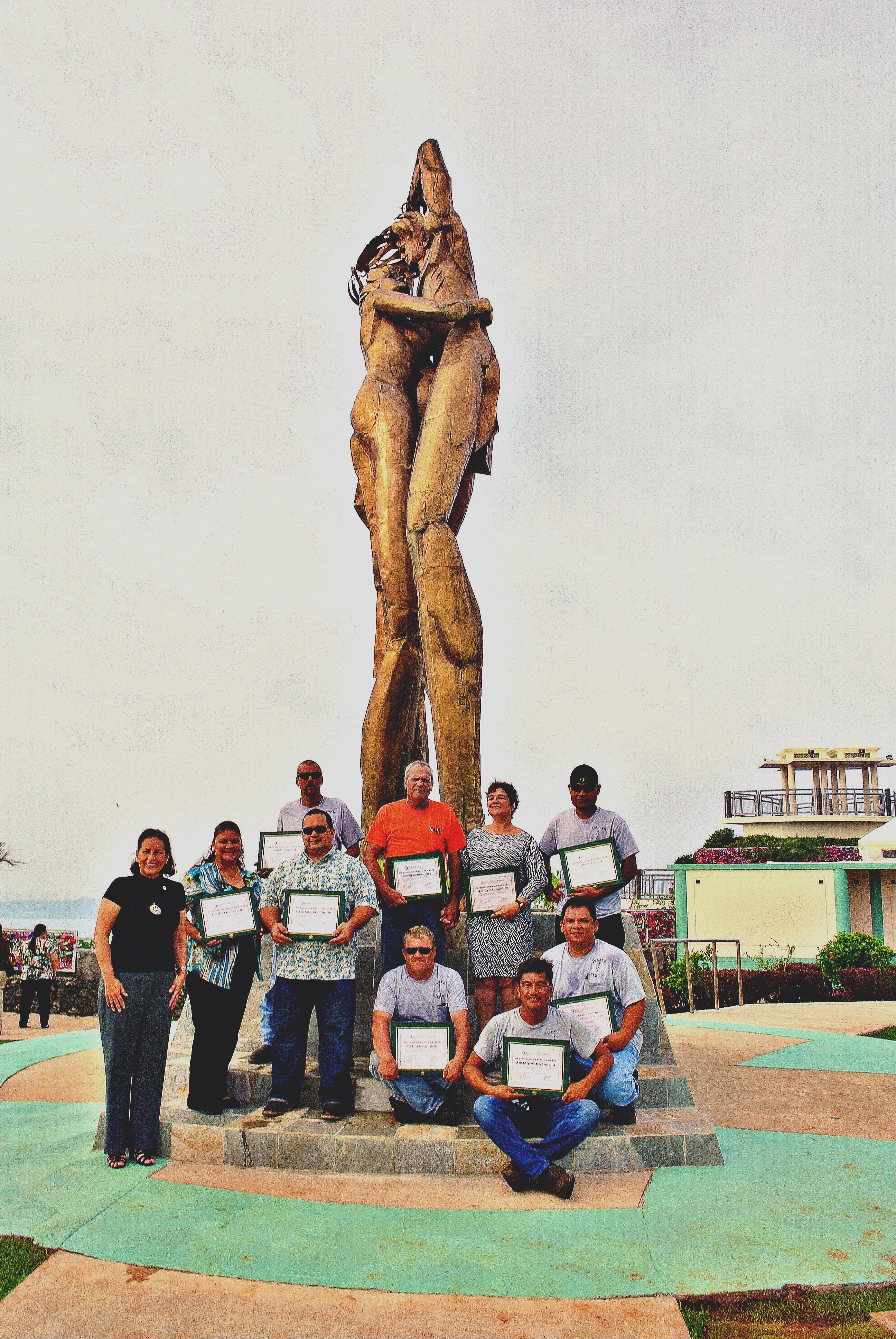 Eleven years later, when Guam businessman David Barnhouse courted Nancy in the spring of 2013, he took her to visit Two Lovers Point. David told Nancy about the tragedy of the two lovers statue, adding that locals believed the statue still lay, bent and broken, in a scrapyard. David vowed that if the statue still existed, he would buy it, have it repaired and brought back to Two Lovers Point as a symbol of his and Nancy’s love. The couple married later that year and soon after their wedding, Nancy began searching for the statue of the two lovers.

For two years, Nancy’s search turned up nothing. Then, one day she met Moses S. Chong, the owner of Green Guam Corporation. Nancy mentioned her search for the two lovers statue and was stunned to learn that Moses had purchased the statue many years ago for scrap but never had the heart to melt it down. The statue of the two lovers had lain in his scrapyard, broken and untouched, for over a decade.

David and Nancy’s company, Island CERTS Corporation (ICC), bought the statue from Moses and transported it to a workshop where workers spent weeks trying to unbend and release the brass from its rusted and mangled steel foundation. Seeing that it was a job that required a specialized welder, ICC hired welding fabricator Armando Nazareta, who spent the next five months tediously separating the rusted pipe from the brass, unbending and reshaping the sculpture and polishing it to its original splendor.

On October 15, 2015, the second wedding anniversary of David and Nancy Barnhouse, the staff of ICC loaded the statue onto a truck and returned the two lovers to Two Lovers Point with this blessing: May the Two Lovers statue be a reminder that eternal love is possible when two mortals fall in love.