With all of the modern attractions Guam has to offer, it might be hard to imagine a time when Guam’s villages were led by Chamorro chieftains and their valorous feats. The following tells of three of these chiefs whose actions were notable enough to earn monuments that can be visited today. 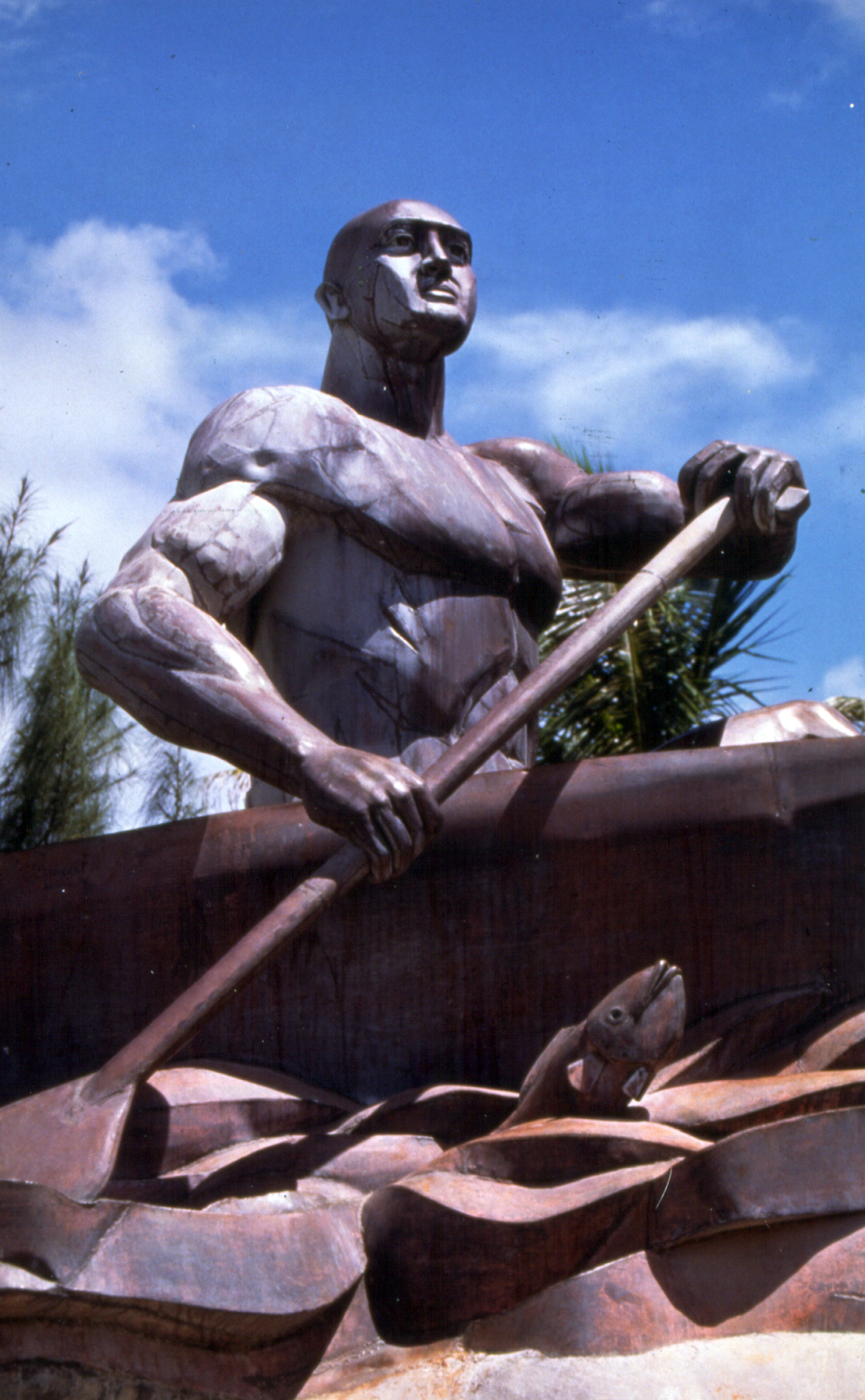 Nestled in the southern hills, the coastal village of Inarajan was the home village of Chief Gadao and the site of a legendary match of strength between Gadao and another chieftain, Chief Malaguana from the village of Tumon.

When a visitor challenged the widely held belief that Malaguana was Guam’s strongest chieftain, Malaguana set out to challenge Gadao and prove his superiority. When Malaguana arrived in Inarajan, he met a man who appeared to be a simple farmer. Not knowing the farmer was actually Gadao, Malaguana explained his desire to defeat Gadao in a match of strength. Keeping his identity a secret, Gadao offered the Tumon chief coconut juice, splitting a coconut with his bare hands. If an ordinary farmer could possess such extraordinary strength, Malaguana wondered how much stronger this farmer’s chief might be. Malaguana decided to abandon his pursuit. In an act of sympathy, Gadao offered his fellow chieftain a canoe ride back to Tumon. Each of the chiefs picked up paddles and set off, unaware that they were paddling opposite directions. Frustrated by their lack of progress, both chiefs paddled harder and harder until the canoe snapped in half.

Today, a monument of Chief Gadao sitting in his half of a canoe rests on the shore of Inarajan Bay. 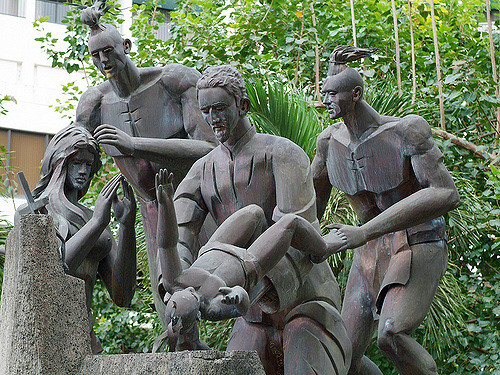 Chief Matapang’s name conjures up a glimpse into one of the most polarizing moments in Guam history. Matapang is perhaps most well known as the chief who murdered the Spanish missionary who introduced Christianity to Guam and the Marianas – Padre Diego Luis de San Vitores. After discovering that San Vitores had entered his home and baptized his daughter without his consent, Matapang acted out in fury and killed San Vitores. The event initiated the Spanish-Chamorro War, and in the resulting violence, an injured Matapang fled Guam and sought sanctuary on the nearby island of Rota. With the intensifying threat of the vengeance-hungry Spanish looming off of Rota’s shores, its residents turned on Matapang and, after stabbing him, banished him on a boat. Matapang died from his wounds on the way back to Guam.

Although initially seen as an ignorant denial of progress, the perception of Matapang’s actions has evolved into a more respectable rejection of colonization and cherishment of Chamorro traditions and culture. A monument has frozen the scene of the forbidden baptism in time and is located between Guam Reef Hotel and Nana’s Café in Tumon. 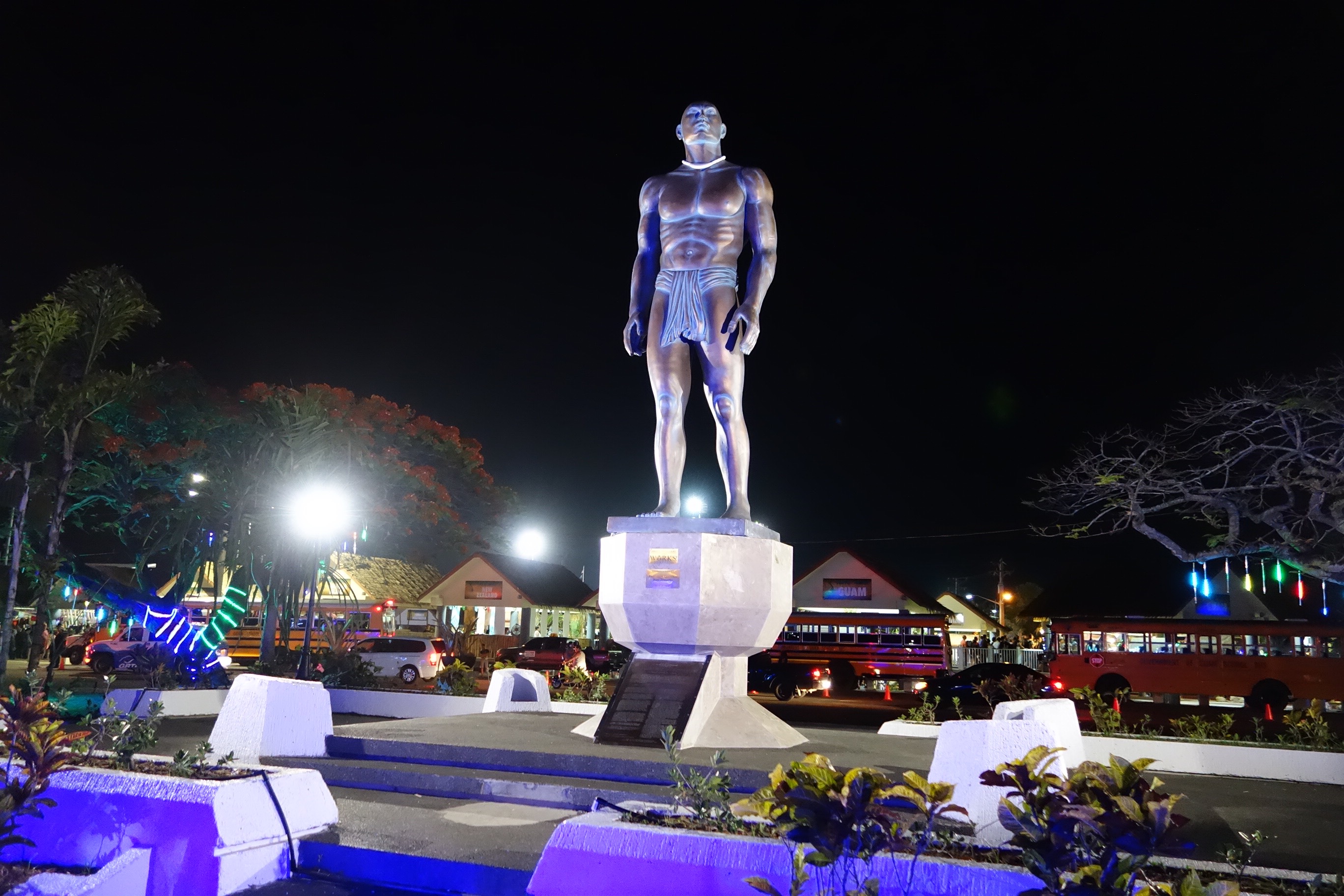 Unlike Matapang, Chief Quipuha accepted Padre San Vitores and Christianity with open arms. Quipuha was the first Chamorro to be baptized after giving San Vitores permission to evangelize in the area. San Vitores and the Spanish wooed Quipuha with the presentation of their purpose to lead the Chamorro people to God and Heaven. Quipuha proved to be a robust supporter of the Spaniard’s mission by not only giving them permission to evangelize, but also providing land in the village of Hagåtña for what became the first Catholic church on Guam. The church was named Dulce Nombre de Maria (“Sweet Name of Mary”) and was opened in February of 1669. Quipuha died shortly after the church was built, and to the anger of the Chamorro people, was buried there instead of with his relatives as Chamorro tradition dictated. This event along with others provoked the Chamorro to action and the subsequent Spanish-Chamorro War.

A statue of Chief Quipuha stands by Hagåtña bay near Chamorro Village and is a short walk from the now-modern Dulce Nombre de Maria Cathedral-Basilica.

For better or worse, these maga’låhi (leaders) and their deeds set them apart as islands in a sea of Guam’s historical figures, forever to be remembered. For a chance to Love History, visit their monuments and delve deeper into their epic stories.